The Female Brain and the Anatomy of Concussion 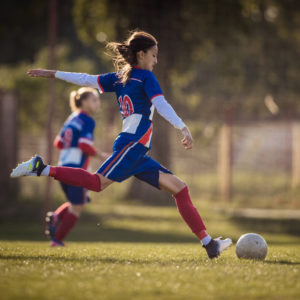 Doug Smith, MD, discusses the distinct anatomy of the female brain and the lasting effects of concussion

Female athletes are shown to have higher rates of concussion and longer recovery times, compared to their male counterparts in the same sport. While the higher rate of concussion may be due to women being more likely to report symptoms, researchers are taking a more in-depth look at why women typically take longer to recover and have poorer overall outcomes.

Dr. Doug Smith—Director of the Center for Brain Injury and Repair, Professor of Neurosurgery at the Perelman School of Medicine, University of Pennsylvania, and founding member of the International Concussion Society’s Scientific Advisory Board—explains how differences in the male and female brains may shine a light on new ways to diagnose and treat concussion.

The Anatomy of the Female Brain

At the moment of impact, when a head collides with another person or object, the brain’s movement can cause stretching and damage to nerve fibers called axons. Researchers think this internal structural damage in the brain—rather than the external impact or variables such as neck strength—is what causes symptoms of concussion.

“It seems like the predominant pathology is going to be something called diffuse axonal injury,” says Dr. Smith. “It’s damage to nerve fibers called axons that travel from one part of the brain to the other and form the white matter. We know that they are selectively vulnerable to become injured upon head impact.”

Dr. Smith likens the brain’s network of axons to an electrical grid. In the case of a concussion, the signals transferred across this network are disrupted. That insight drove him to take a closer look at the difference in female axons in comparison to male axons.

“What we recently discovered is that there’s a difference down to the nanoscale between the nerve fibers of these axons in male and female brains. And females might have a more complex network in their brain than males, but the skull is smaller from females to males,” explains Dr. Smith. “Maybe to get a similarly large or maybe even larger network in a smaller box, so to speak, what was changed was the architecture and size of the axons on average. If they’re on average smaller in the female brain, given the same mechanical force, that means they’re more likely to have damage to the internal skeleton.”

This damage can affect how signals are transmitted and block the transport of proteins down thin structures called microtubules. When these proteins cannot be transported, they can build up, which can lead to swelling and ultimately a disconnection of the axon.

“We think that the damage to these axons may contribute to delayed recovery,” Dr. Smith says.

Treatment protocols for concussion are continually evolving, so there isn’t a general recommended protocol yet, let alone a female-specific one. For example, in recent years, a treatment called “cocooning”—in which a person avoids lights, electronics and other stimulation for a certain period—was often used. But that’s changing as we learn more about concussion and the brain. “We’re turning toward active rehab or sub-threshold training, where you do some exercise to the point of feeling discomfort, just below that threshold and get the blood moving,” says Dr. Smith. Once a person starts this type of protocol, their rate of recovery can be used as an individualized “control” to guide further treatment.

While research on concussion is making progress, this field of study is still in its early stages. Researchers are looking to examine a wide range of individuals to gain a better and broader understanding of the brain. “Why do some who experience a concussion do well later in life, but others seem to have issues earlier?” asks Dr. Smith.

Identifying genetic differences between the sexes, as well as more subtle genetic markers, will help researchers pinpoint what makes one person more at risk for a delayed recovery, poorer outcome or even degenerative effects than another. “We would like to have some kind of screening tool, whether it’s genetic or otherwise, to identify individuals who would be most at risk,” says Dr. Smith.

In the meantime, Dr. Smith acknowledges that participating in sports can provide physical health benefits, a sense of teamwork and a mental boost. However, he also encourages coaches and athletes to look for ways to reduce the risk of concussion, such as penalizing aggressive play. Being aware of the risks and doing what’s possible to prevent brain injury is the first step, as the research on concussion, its effects and treatments continue.

Doug Smith, MD, is a Scientific Advisory Board Member of the International Concussion Society. The International Concussion Society sponsored website Concussion.Org  is the number one destination for information related to concussion prevention, diagnosis and treatment. Our mission is to serve medical professionals, athletes, administrators, coaches, patients and the public by providing a central repository of accurate and scientifically vetted concussion research. Working alongside our world-class scientific advisory board, Concussion.org aims to be the most trusted global index on one of the most common, yet least understood, forms of traumatic brain injury. If you would like to be interviewed for an influencer profile, please fill out this form.