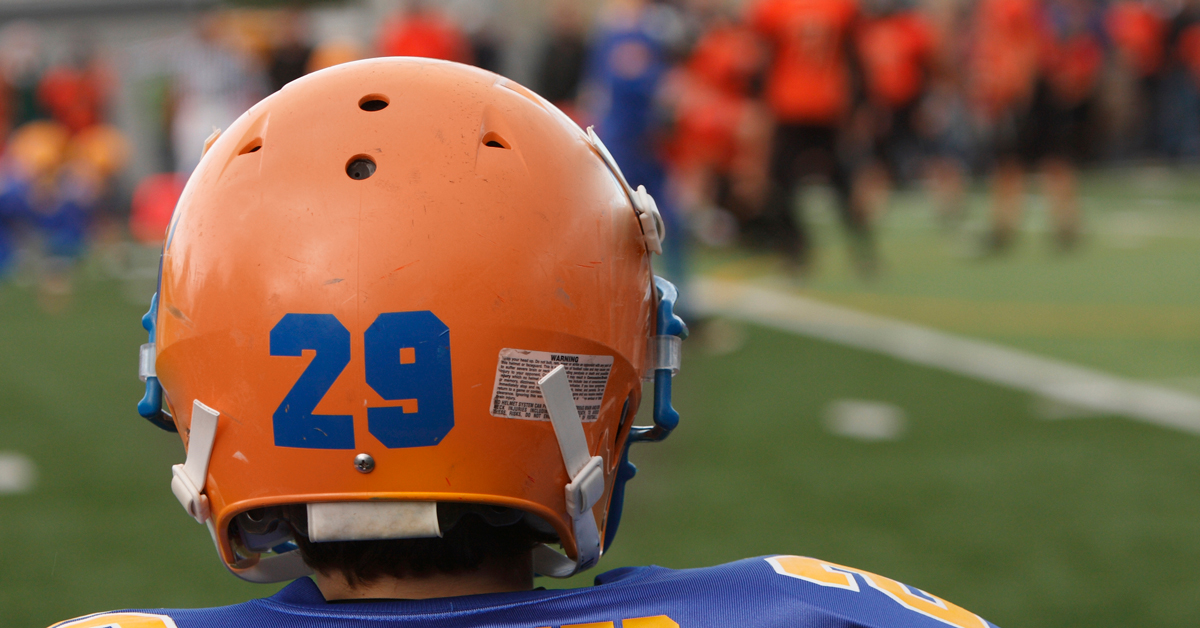 Helmets are standard-issue when it comes to football. Most people may think that helmets are intended to prevent concussions. But this is not actually the case, and is one of many football helmet misconceptions. While helmets can defend against skull fractures and serious brain injuries, they can’t stop the movement of the brain inside the skull that causes concussion.

“The general stance in the scientific community is that helmets are effective in preventing skull fractures and very serious brain injuries,” says International Concussion Society President Dr. John Leddy. “The brain accelerates, decelerates and rotates. So, the brain tissue moves even though a player is wearing a helmet. The helmet can’t decelerate the brain when somebody falls or gets hit.”

We recently spoke with Dr. Leddy about football helmet misconceptions and how this gear should be viewed in the context of safety equipment.

What are common football helmet misconceptions in terms of how they prevent injury?
Helmets can lose their efficacy over time in terms of being able to absorb force. A helmet that’s more than two years old is probably not as good as a newer helmet in terms of being able to absorb force. Having one that fits well is also important. Helmets should fit snugly on the head and worn with a chin strap so it doesn’t move around too much. If it doesn’t fit right or isn’t held in place by the chin strap, then it might actually make things worse if you get hit or fall. This is because you’re creating more movement around your head and neck than if you were wearing one that fits well—or not even at all.

How can helmets be improved upon?
There are helmets being developed that are supposed to fit better and maybe reduce some of the forces absorbed by the head and the brain. But I don’t know of one yet that’s been shown to actually reduce the incidence of concussion in a well-designed scientific study. There are helmets being developed with newer shock-absorbing systems, and some reportedly have a more mobile outer shell that might deflect or absorb rotational forces. Theoretically, that makes sense. But you have to show in real life that they actually work. This takes a big, complicated study. Those are the challenges that helmet manufacturers have to overcome.

Can you tell us more about helmet safety ratings? Are those an accurate measure of safety?
In the NFL, they only recommend helmets above a certain safety rating. I think that’s useful. It’s trying to set a standard for helmets in terms of basic ability to absorb force when compared with other helmets. I think this is useful. People should pay attention to those ratings, but they have to know that a helmet can’t prevent a concussion. So, if you’re wearing the highest-rated helmet and it fits well, but you hit your head and feel concussed, don’t treat your symptoms any less importantly. You very well could have a concussion.

We hear the argument that helmets actually contribute to a false sense of security and could lead to more aggressive behaviors on-field. What are your thoughts on that?
There’s some evidence for that. Not a whole lot, but it is a theoretical consideration. You put a good helmet on somebody and they’re more likely to think their head is protected and they can use it as a weapon. You see a lot of players in the NFL lead with their heads. It’s only because they’re wearing a helmet that they would consider doing that.

There’s the sport of rugby, where there’s tackling and they don’t wear helmets. As a result, they tend not to lead with their heads. They tackle with their shoulders more. They still get concussions, so it’s not like taking helmets off will prevent that. But I think changes in American football will come through rule changes and, hopefully, awareness that using your head as a battering ram isn’t a good thing.

What are safe sport behaviors that you would recommend players/ teams exercise in addition to wearing a helmet?
Not leading with your head is one of them. If you watch NFL games, lots of these defensive players launch their bodies head-first to impart maximum force. But more often than not, you see that player literally bounce off the opposing player. I think employing safer tackling techniques would go a long way to avoid head-first collisions.

Those kinds of rules are in place now—kickoff returns are limited because that was one of the highest-risk plays in football for concussions. This actually led to a reduction in concussions for the NFL, so that worked. Rule changes have helped. But that being said, we should also be educating these players about tackling properly and not leading with their heads. They should be using their shoulders and wrapping the player up with the arms. This is probably a safer and more effective way to tackle.