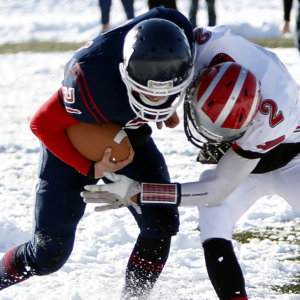 With 90% of sports-related concussions occurring without loss of consciousness, it’s important that sideline tests be as accurate as possible to prevent an athlete from continuing play with a traumatic brain injury. The King-Devick Test in association with Mayo Clinic (K-D Test) is a common sideline concussion test used by medical professionals, as well as trained parents and coaches. The test compares a subject’s baseline with repeated test results to identify worsening physical and functional conditions that may indicate a concussion.

A new study conducted by researchers at the University at Buffalo, including John Leddy, MD, FACSM, FACP, President of the International Concussion Society, sought to evaluate the effectiveness of the K-D Test in young athletes and kids.

What is the King-Devick Test?

The K-D Test is a portable, two-minute assessment of an individual’s eye movements, attention and language. The K-D Test evaluates saccadic eye movements, or rapid movements with both eyes, as well as processing speed and visual tracking. The test times each patient and tracks their errors as they read single-digit numbers displayed on an electronic tablet.

After first establishing a baseline prior to the start of the season, trained parents and coaches can conduct the K-D Test as part of their concussion protocol. The test software will then compare the results with the baseline, searching for any declined saccadic function–a common indicator of concussion. 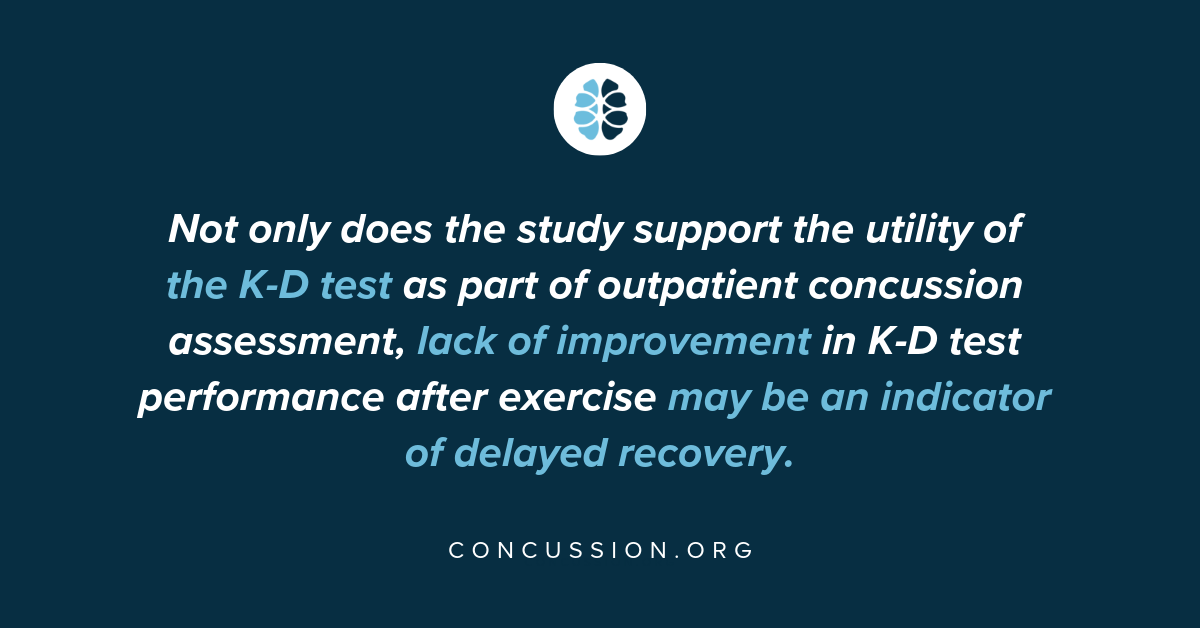 The University at Buffalo researchers studied adolescent patients–kids age 10-19–who were diagnosed by a doctor with a sport-related concussion within ten days of injury. Patients of the same age without concussions served as a comparison control group. Across two clinical visits a week apart, patients received K-D testing before and after exercising on a graded treadmill test to their symptom limitation (the Buffalo Concussion Treadmill Test).

The young patients with concussions performed significantly worse than their counterparts on the pre-exercise K-D Test, demonstrating that the K-D test is a useful tool in distinguishing healthy controls from concussed patients in an outpatient clinical setting.

After exercising on the treadmill, concussed patients who performed better on the K-D test when compared with their pre-exercise times had a typical concussion recovery time of seven to ten days and were recovered by the second visit. Conversely, concussed patients with delayed recovery–who required more than two weeks to recover–showed no significant difference in their K-D Test results after exercising when compared with their pre-exercise performance. The authors concluded that a lack of improvement on K-D Test scores after exercising on the Buffalo Concussion Treadmill Test predicted which adolescent patients would have a delayed recovery from a sport-related concussion.

“Not only does the study support the utility of the K-D test as part of outpatient concussion assessment, lack of improvement in K-D test performance after exercise may be an indicator of delayed recovery.”

The study’s results indicate that the K-D Test is a useful component in concussion management by helping to identify those patients who are at risk of delayed recovery after sport-related concussion. The ability to help predict how long a child’s recovery from sport-related concussion has the potential to help doctors, parents, teachers and coaches plan for the child’s return to school, not to mention a safe return to sports. This is groundbreaking insight for patients and their support systems.

For more breaking news and resources in the field of concussion, make sure to follow Concussion.Org on social media.