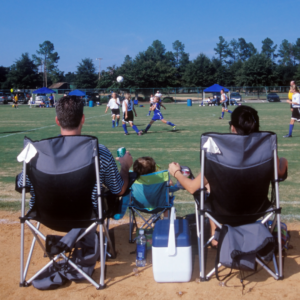 Think your child may have sustained a concussion? Follow these steps.

For any parent, seeing your child in pain is complete agony. And when it comes to a head injury that could potentially be traumatic, it’s especially painful. The question is, what to do next. Concussion symptoms aren’t always visible and don’t always present immediately. But noticing signs of a concussion is crucial in children, as their brains are more susceptible to concussions because they are still growing, according to the Concussion and Brain Injury Clinic at Weill Cornell Medicine.

Here is everything you, as a parent, should know about concussions.

Talk to your Children Before the Games Begin

As a parent, you can protect your children by learning about the signs of concussions, and then talking to them about these signs so they know when to speak up. Encouraging children to be open and honest will reinforce that concussions should be taken seriously, and are not something children should “tough out.”

Know When and Where Concussions Can Happen

The common knowledge that many concussions occur in contact sports is accurate, but they can also happen from other activities. The most concussions in youth sports occur in rugby, hockey and football, according to a study published in the British Journal of Sports Medicine. However, concussions can occur in other sports such as soccer, basketball and volleyball that don’t offer much protective equipment. In addition, concussions can happen from everyday incidents, such as whiplash from a car accident or falling off a bike, according to the Mayo Clinic.

Immediately after a head injury, a child with a concussion might experience a headache, the feeling of pressure in the head, momentary loss of consciousness, dizziness, nausea, confusion, slurred speech or fatigue, according to the Mayo Clinic. Be aware that in some cases, symptoms of a concussion might show up hours, days or even a week after a head injury. More delayed symptoms include: sensitivity to light and noise, difficulty remembering things, irritability, sadness or depression, and difficulty sleeping.

If your child exhibits any of the following dangerous symptoms identified by the Centers for Disease Control and Prevention after a head injury, go to the emergency room immediately.

The American Academy of Pediatrics recommends bringing a child who experienced a head injury (even something as small as a slight bump) to the doctor within one to two days of the injury or at the first sign of any symptoms. Even if your child doesn’t show any symptoms, getting him or her examined by a medical professional is a safe step to take. If your child exhibits concussion symptoms following the initial appointment, a follow-up visit should occur.

Provide a Smooth Road for Recovery

Should a concussion be diagnosed, one of the most important factors to ensure the long-term safety of the child is a long recovery process. Children and teenagers can take longer to recover from concussions, notes the CDC. To aid recovery, focus on ensuring your child gets ample rest and is free from as many distractions as possible.

Be mindful that mental rest is as important as physical rest. Activities as minor as studying or playing video games can worsen concussion symptoms, according to St. Louis Children’s Hospital and the Washington University School of Medicine. You should also give your child extra time to do things and allow for breaks in activities.

In addition, even after your child’s concussion symptoms have subsided, you should be on the lookout for signs of post-traumatic headache. This type of headache typically presents within seven days of a concussion, is often moderately to severely painful, has a pulsing sensation and can persist for months, according to the American Migraine Foundation.

Be Cautious About Returning to Play

Children shouldn’t return to any sports or activities until all symptoms are gone. If a second concussion is experienced before a child heals from the initial concussion, second-impact syndrome—rare, but potentially fatal swelling of the brain—can occur, according to the American Association of Neurological Surgeons. The risk of second-impact syndrome is higher in contact sports like football and hockey, notes the AANS.

By following the above concussion protocol, you can ensure your child will return to health as safely and quickly as possible. For more tools for parents, visit our resource center.